and all the Americas

Her feast day is December 12 and is always a huge event.  This year, however, is different.  The Los Angeles Times notes that in Mexico City:

"For weeks, church and civic authorities have been urging people to stay away from the storied shrine — erected alongside the hillside where, according to Catholic teaching, Mary, the Mother of Jesus, appeared to a peasant, Juan Diego, in 1531, just a decade after the Spanish conquest. The apparition and the central artifact of veneration — an image of the Virgin that is said to have been imprinted on Juan Diego’s cloak, which is now preserved and on view at the shrine via a moveable walkway — helped solidify Catholicism among Mexico’s indigenous masses." 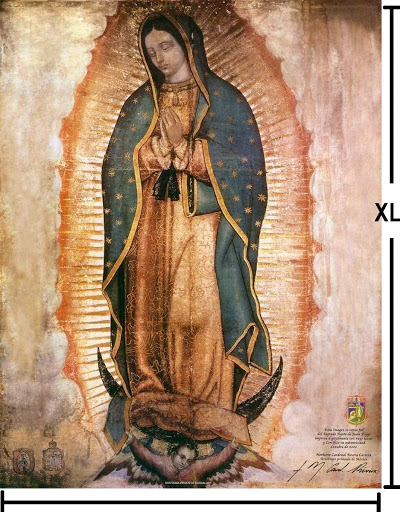 "Bowing to the COVID-19 pandemic, Catholic and civic leaders canceled this year’s celebrations, which usually draw up to 10 million fervent disciples, including many who travel long distances to give thanks and seek the protection of the patron saint of Mexico. Saturday was the actual feast day, but visitors began arriving weeks before, many camping along the route.

The shrine, the most visited Roman Catholic site in the Americas — and second in the world only to the Vatican — was closed from Thursday through Sunday. A massive security deployment sealed off nearby streets. The basilica’s environs took on a ghost-town appearance except for the overwhelming police presence.

The shutdown came as Mexico is experiencing an alarming spike in coronavirus cases. Mexico City, home to almost 9 million people, is at the epicenter. Mayor Claudia Sheinbaum warned Friday of a COVID-19 emergency and issued an urgent appeal for people to stay home."

Posted by Teri Coppedge at 4:17 PM

Cognates: words that are similar in two languages, in both spelling or sound and meaning.

Words that end in "or" are often identical in both English and Spanish. So, you already know these words! Spanish words that end in "r" are stressed on the last syllable (doc-TOR).
actor
doctor
color
director
doctor (also médico)
error
exterior
honor
horror
humor
motor
opresor
superior
tumor
vigor

The words below are all related to personality characteristics, so you can use them to describe someone. You might notice that most can end in -o (masculine) or -a (feminine). But others don't change their endings, they can refer to either a masculine or feminine person. For example, artista or dentista = an artist or dentist (m. or f.) idealista, optimista. Words ending in -l or -e don't usually need to change endings for m. or f., although they do add -s or -es for plurals. (Ellos son sociables y joviales. Sus amigos son elegantes.)

Monolingualism can
be cured.

Al cine / At the movies

El ciudadano ilustre, de Argentina. https://www.imdb.com/title/tt4562518/
Me gustó mucho. La recomiendo. Besides being a fun and interesting film to watch, with plenty of twists and turns, it's really good for listening to Argentine Spanish dialect.
Warehoused (Almacenados) 2015 en Netflix
This occasionally absurd dramedy works on all levels. TWITTER
I really enjoyed this film about a young man reporting for work at his new job and his retiring boss, who has only a week to teach the new man all the details of the job. It's in understandable Spanish, with very little dialog, and wonderful repetition of several stock phrases.
Medianeras (Sidewalls) (Argentina) 2011
"Separated by the wall their apartments share, Mariana and Martin are the perfect couple. They have the same quirks, same tastes, same ideals and even the same neuroses--they're a match made in heaven. There's just one problem -- they've never met. " - Netflix.

Chico y Rita (Cuba)
An animated film about love, time and distance. Quite delightful, and I barely noticed it was animated. On Netflix.

La misma luna (Under the same moon)
This drama centers on a young boy's journey across the U.S./Mexico border to be reunited with his mother. Adrian Alonso stars as Carlitos, a Mexican boy living with his grandmother while his mother works as a maid in the U.S., hoping someday to send for her child. But when the grandmother dies unexpectedly, Carlitos must sneak across the border and seek out his mother.
This is a film for the whole family and it puts a very human face on the immigrant story.
Try watching it in Spanish with or without English subtitles. Then, find a scene you understand and play it several times to practice listening.

The Way, 2011
This film, directed by Emilio Estévez and starring his father Martin Sheen, is not in Spanish. But it is filmed in Spain, and France, and shows a man walking The Way, el Camino de Santiago. This is a pilgrimage to the supposed burial site of St. James the Apostle, Santiago de Compostela, a town in northwest Spain in the area of Galicia. One pilgrim from Ashland told me she had stayed in some of the same "albergues" (shelters) as Sheen and that the movie was very authentic in presenting the experience. I liked it very much and recommend it as a treatment of father-son relationships and personal growth as well as for the wonderful scenery. ¡Buen camino!

Even the Rain / También la lluvia

In my opinion, this is an outstanding film in every way. For students of Spanish, the contrast between the Castilian Spanish of the film crew and the Bolivian Spanish is wonderful to hear. You might also catch some local Quechua dialect. Available on Netflix.

What's it about? Read the info I lifted from the official website, www.eventherainmovie.com:

"A Spanish film crew led by idealistic director Sebastian (Gael García Bernal) and his cynical producer Costa (Luis Tosar) come to Bolivia to make a revisionist epic about the conquest of Latin America - on the cheap. Carlos Aduviri is dynamic as “Daniel,” a local cast as a 16th century native in the film within a film. When the make-up and loin cloth come off, Daniel sails into action protesting his community’s deprivation of water at the hands of multi-national corporations.

This fictional Fitzcarraldo-like quest to make a film against all odds is set against the back drop of the real life “Water Wars,” fought against the privatization of Bolivia’s water supply in the year 2000 and is anchored in the philosophies of historian Howard Zinn, as well as the stories of 16th century priests, Fathers Bartolome de las Casas and Antonio Montesinos, the first radical voices of conscience against an Empire."

Teri Coppedge
Ashland, Oregon, United States
I am a Spanish teacher with 20 years of experience in teaching Spanish by using stories, to students from elementary school through middle school, high school, college and beyond. TPRS is best way I have found to help students understand, talk, read and write in another language. It’s fun, interactive, creative, effective and memorable. I have a B.A. in Spanish from Santa Clara University, CA, and a M.A. in Teaching Languages from Univ. of Southern Mississippi. I have lived in Madrid, España, México, (Mexico City and Morelia, Michoacán) and Piura, Perú.

This site gives you not only a simple, or complex definition of the word you need, but also access to forums where Spanish and English speakers discuss usage, dialects, grammar points, nuances, special situations and more related to those words or phrases. Highly recommended!